Look! I only took 128 pictures of Sugaree today on our trip to Masonboro Island! I think I took 163 last time. I can't help it. She's cute. 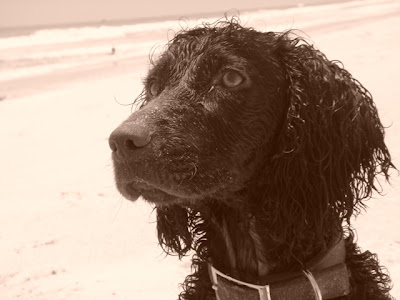 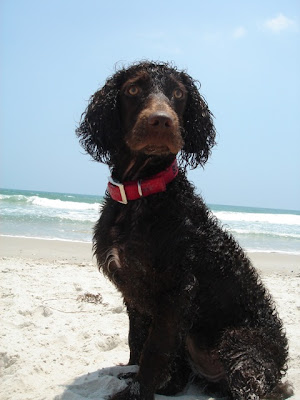 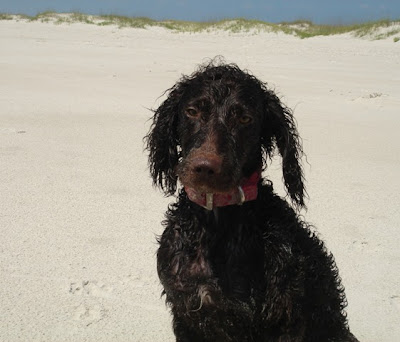 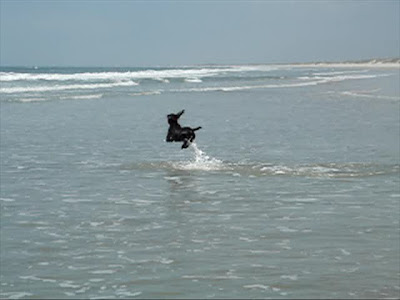 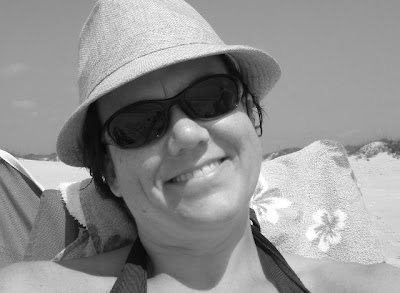 Posted by bess andrew at 6:31 PM No comments:

I completed my second sprint triathlon on Sunday! It was so much fun. I finished in 1:47:24 which was about 7 minutes faster than my projected goal! Yay for me!

Neal and I started the weekend at the participant meeting at the NCFFA Camp on Saturday evening. We drove to White Lake, NC, which is about 7 miles from Elizabethtown. We picked up my packet, complete with official WLS tee and my race number (133) for my swim, bike and run. We browsed the expo and dipped our toes in the water. It was a beautiful night and the water was warm (about 75 degrees) and I decided that I would be able to swim on Sunday without my wetsuit top.

On Sunday morning, we left Wilmington at 6:00am and arrived at the camp/event site around 7:15. We parked outside the event on Highway 53. Neal and I both biked to the camp. I dropped off my bike and headed to the body marking and chip timing stations. I had to send Neal back to the car to get my water bottle for my bike. One of the secret weapons I learned from Cheryl Osborne (my mentor for the SheRox Tri) was to freeze the water in an insulated bottle overnight. By the time I was on the bike I had some righteous cold water to quench my thirst! 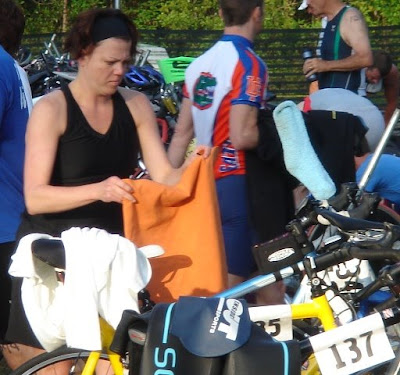 The next 45 minutes seemed to stretch on forever. The race was set-up in a wave format. The fastest of the fast (elites) go first and every 5-7 minutes another wave is released. The first wave started at 8:00am and my wave of 35-39 year-old women and the Athena division had a start time of 8:32. I stretched, jumped in the water, tested my swim cap, my goggles and my stroke. Repeat. 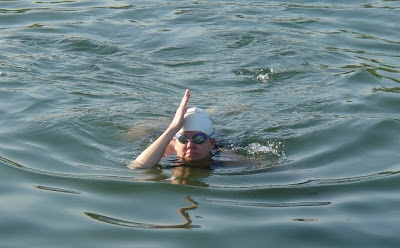 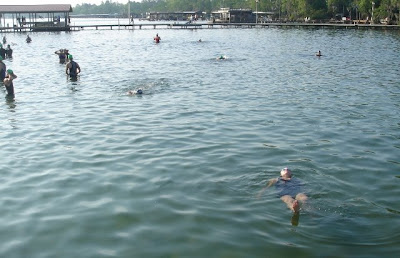 Trying to relax in the water before my start. The first swimmers have already finished the 750 meter swim and are running down the pier in the distance. 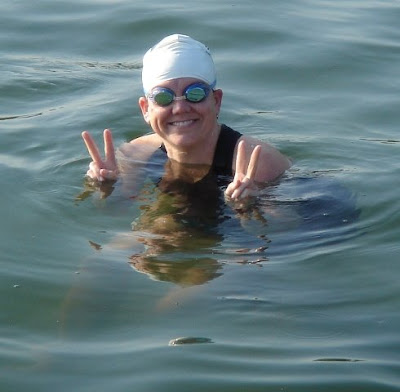 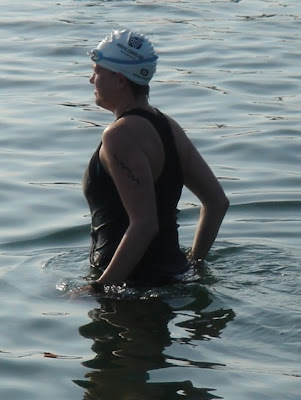 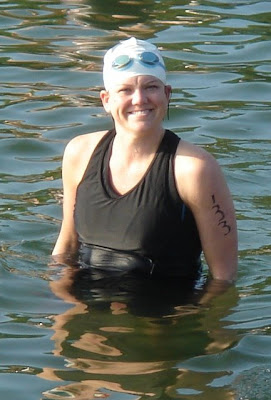 FINALLY, the horn sounded and we were off! 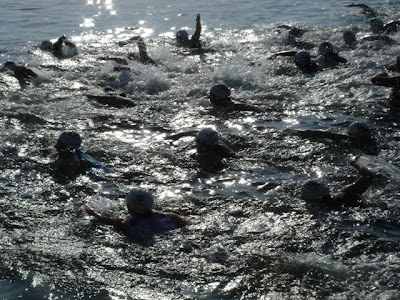 I was really excited about my swim despite a shaky start. My left goggle lens was foggy so I had a hard time sighting the first turn buoy. I also started out way left which probably slowed me down BUT, my my stroke was even at the first turn and my last 300 yards were fast! 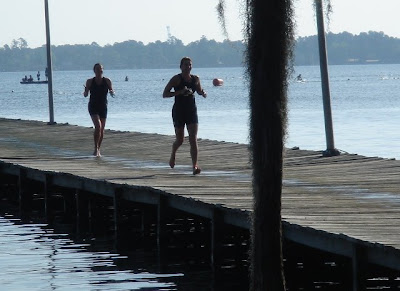 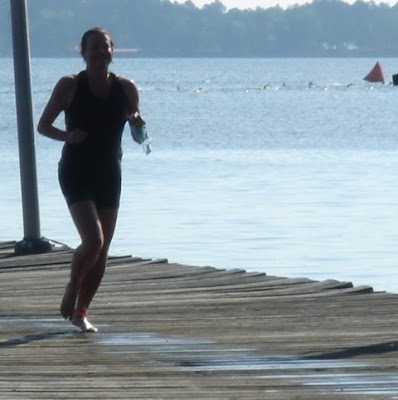 Here I am running down the second pier after the swim. Those are swimmers in the background getting ready to make the turn at the last buoy. 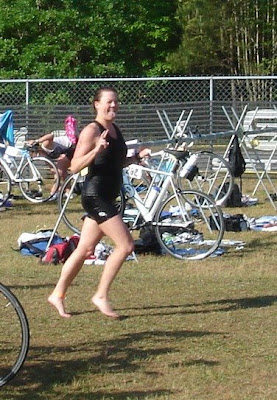 Neal, my GAS man (gear-and-support) met me a the end of the swim and let me know I was right on pace. He followed me to the bike transition area which I think I raced through in under 3:00 minutes. (My results lump my transitions in with the bike segment so I'm not positive about exact T1 and T2 times). The bike is a 14-mile, 2 lap course around the lake. The course is flat as a fritter but it was WINDY! On mile 5-6 and mile 14-15 I slowed from a 3:32 mph pace to about 4:40mph. Yuck! I literally shook my fist at the wind during the second lap. Overall, I was pleased with my effort on the bike: my max speed was 21 mph and my middle miles were faster than my first lap. I basically did intervals on my second lap: 2 minutes hard and 1 minute recovery. Plus, I passed a 25-year-old with a tricked-out Trek. HA! My estimated bike time (without transitions): 50 minutes. 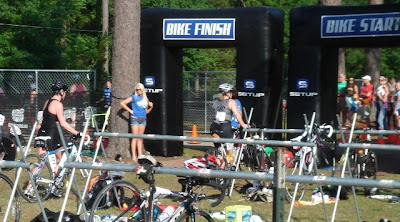 Headed out of the transition area after the swim. It was a little weird to see some of the elites already back in from the 14-mile bike course and starting the run. 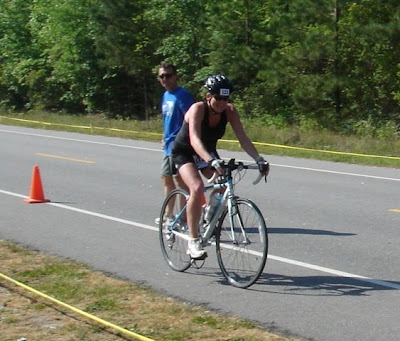 I have to admit, I was not excited about the run. My legs felt like concrete and the heat was, well.....hot. I think it was about 80 and the shade beneath the cypress trees was quickly disappearing. My goal was to run the 3.1 miles in 30 minutes or less. By the time I got into the Waterford neighborhood, my goal was to make it to the turn around, walk for one minute and then run the rest. Amazingly, my pace still registered about a 9:20 pace for the first 1.5 miles despite the fact I was sure that my legs were turning to stone with every step. I walked for one minute at the turn-around and then walked again for one minute at the water station. Honestly, that walk felt really good. Of course, my run finish: 32:04! Argh! Missed it by THAT much. I was discouraged until about 5 minutes ago when I realized that my overall time was faster than predicted. Sweet! 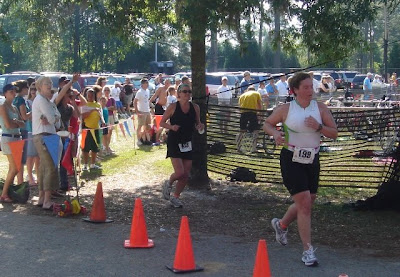 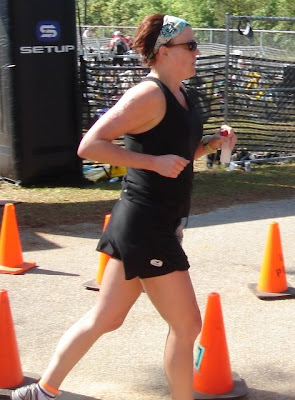 I was so excited to cross that finish line. One thing I love about triathlons is that there are two timing mats at the end of the race. The first timing mat gives your race info to the announcer and the second mat records your finish time. As you run over the finish mat, you can hear the announcer say, "from Wilmington, North Carolina.....Elizabeth Andrew!" I like it!

Sprinting it out at the end! 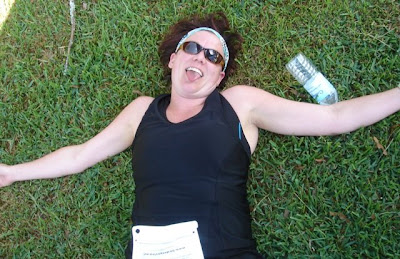 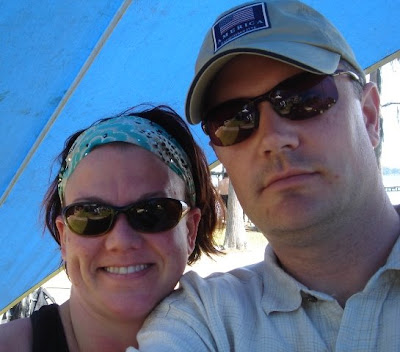 Many thanks to Ace - the best GAS (gear-and-support) man ever!
He was so encouraging and fun to see on the course. Love you, Honey! 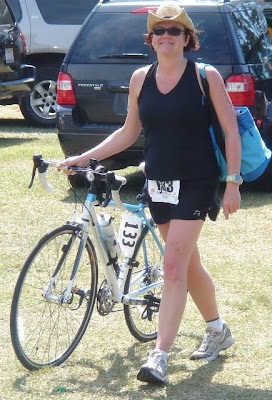 I think I was even more excited for the OREO cookies at the finish line. Mmmmmm.....tasty. My other favorite part: championship fries from McDonalds (as Neal dubbed them) on the trip home! And, the Veuve Clicquot on Sunday afternoon. Oooh....and the ceremonial Chick-Fil-A value meal on Monday with a large sweet tea. Oh, yeah!!! Can you tell the real reward after a race is food? All the things I forgo during my training I eat after a race. Hooray!

Mark your calendars for the morning of SATURDAY, SEPTEMBER 19. That's my next triathlon and it's here in Wilmington! It's the YMCA Tri at Wrightsville Beach and there's still time for you to enter! If you don't want to compete with me, you can join EA Sports. Not that EASports it's Elizabeth Andrew Sports! You can be a part of my cheer squad. I would love to have people scattered along the course to cheer me on. It truly makes me faster. Maybe we'll have a party after at the nearest Chick-fil-A! :)

Posted by bess andrew at 6:38 PM No comments: 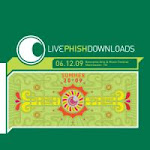